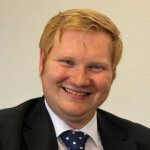 Robert joined Bates in April 2016 after completing his legal studies Bournemouth University and the College of Law in London. Before joining Bates Robert worked for a small firm in Bournemouth initially starting as a Legal Assistant before being promoted to a Conveyancer responsible for his own caseload.

Based in our Hook office, Robert undertakes all aspects of residential conveyancing including freehold and leasehold sales and purchases; lease extensions; re-mortgages and associated legal matters such as Declarations of Trust and Deeds of Variation. Robert also has experience in plot sales and purchases and Land Registry First Registrations.

Robert is married to Yasmine and they have three miniature dachshunds (Frank, Tuppence and Humphrey). In his spare time he enjoys playing golf (although his handicap is his golf), walking in the countryside or along the coast, going to the theatre and cinema. Robert is also partial to a decent dinner with a suitable bottle of wine.