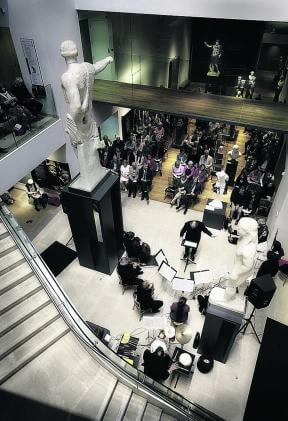 OSJ was founded 48 years ago by its Director, John Lubbock, and its original home was St John’s Smith Square in Westminster, where it still performs. OSJ appears regularly in London and at concert halls and festivals throughout the country and its concerts have featured world famous soloists such as Dame Felicity Lott, Sir James Galway, John Lill, Yuri Bashmet, Tasmin Little and Steven Isserlis.

The Orchestra of St John’s has built a strong following in Oxfordshire where it has strong links with the Ashmolean and sponsors such as Blackwell’s Music and Oxford Instruments. It presents a series of ‘Proms’ in the Ashmolean Museum through the year, a concert series at Christmas and at Easter and an annual festival ‘Music in the Abbey’ in Dorchester every September.

The Orchestra has always been engaged at the heart of the community and its musicians provide more than fifty musical events for children with autism and for adults with dementia.

The Orchestra of St John’s is enormously grateful for the generous financial support of its Patrons and Supporters. Without their assistance it would not be able to continue performing music at the highest possible standard or to carry out its community work with autistic children and their families and people with dementia.

If you appreciate OSJ’s work and would like to find out more about becoming a sponsor of the orchestra, please contact Peter Cousins.

We are grateful to Simon Payne for providing information about OSJ